We’re appealing for information following an aggravated burglary in North Somerset which left a man with head injuries.

Three men wearing balaclavas forced entry to a property in Streamcross, Claverham at about 8.15pm on Wednesday June 17 and confronted the victim, a man in his 20s, who subsequently fled. The offenders gave chase and attacked the victim with a hammer.

We’re releasing images of two men we’d like to speak to in connection with this incident, which police believe was an isolated and targeted attack. 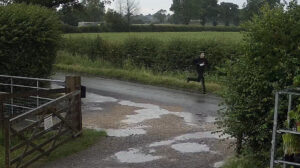 They are described as white, aged in their late teens, of small build, wearing dark coloured tracksuits with hoods.

Anyone with information that could help police identify them is asked to contact 101 and give the call handler the reference 5220132707.