You are here: Home » News » Update on investigation into theft of Lord Mayor’s chains in Bristol

Detectives investigating the theft of civic ceremonial jewellery in Bristol are renewing their appeal to members of the public to help find them.

Tomorrow (24/10) will mark eight months since offenders broke into a unit in Smeaton Road, Hotwells and stole two safes which contained the Lord Mayor’s Chains.

CCTV captured the moment in the early hours of Monday 24 February when a group of men used a white Transit van to drag one of the safes out through a Perspex panel on the side of the building, before putting it into the back of the van. 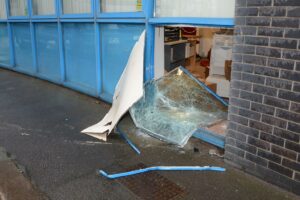 Following the incident, officers have carried out an extensive search of CCTV footage from the surrounding area and have pieced together the route they took out of the city after leaving the scene:

One of the safes was found in Greville Smyth Park the following day by a member of the public, who handed it in.

The safe which contained the Lord Mayor’s Chains was found dumped in Greatstone Lane, which runs between Crown Hill and Frog Lane near Winford. The whereabouts of the two chains are unknown. 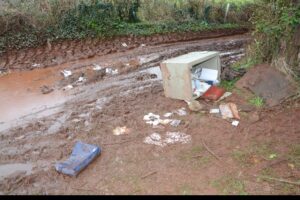 Officers have established that there were six people involved in the incident. Three men have been arrested as part of the ongoing investigation.

The investigating officer from Operation Remedy, Beth Sutor, said: “Through our investigations we have managed to piece together the detail of what happened back in February. We don’t believe the chains were specifically targeted, more that this was opportunistic crime. There is reason to believe that the chains may still be in the Winford or Chew Valley area, so I would appeal to people in the local area to be on the lookout. If anyone wants to provide information anonymously, please call Crimestoppers on 0800 555 111.”

The Chain of Office of the Lord Mayor is 139.6 cm long and made of 23-carat gold. It is formed entirely of gothic medallions decorated with stars and coupled by pairs of smaller links, with a pendant badge, also of gold, bearing the arms of the city. It was purchased in 1828 from Green and Ward of London for £285. Additional chains to support the weight were added in the 1970’s. It had been worn by 51 Mayor’s from 1826 to 1898 and 105 Lord Mayors since 1899. 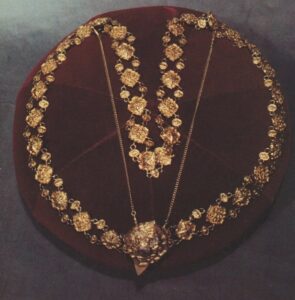 The Chain of Office of the Lady Mayoress 96 cm long and made of 18-carat gold. Its badge is enamelled with the city arms, surrounded by diamonds, with an outer border of sapphires. It is suspended on an ornamental five-row chain kept together by foliate links. It was purchased in 1926 from Alfred Chilcott & Co of Bristol for £181.

The money to purchase it was raised by an appeal to the women of Bristol to contribute to a fund to purchase a chain of office for the Lady Mayoress, in recognition of the increasing share in the public life of the country which women were taking ‘in modern times’. Contributors included the Dowager Lady Ashman, the National Union Railway Women’s Guild and staff of Novers Hill Hospital. It was previously stolen in 2003 during a function in Weston-super-Mare, but later found and handed in.

Following the theft of the chains in February, the current Lord Mayor of Bristol, Councillor Jos Clark, appeared on Crimewatch to appeal for their safe return.