You are here: Home » News » Working with partners to tackle Islamophobia

Islamophobia can have a devastating impact on a victim, their family and their community. We know that anti-Muslim hate crimes are often driven by misconceptions about the cultural nuances that form part of the Muslim community’s makeup.

One of the ways in which we are tackling anti-Muslim hate crime is by taking a partnership approach to building relationships with communities and educate people about different cultures, religions and nationalities.

World Hijab Day – an annual event taking place on 1 February – offers the opportunity to clear common misunderstandings about the hijab break stereotypes and celebrate Muslim culture, with the aim of reducing the number of anti-Muslim hate crimes in our region.

We know that women from the Muslim community are more at risk of being the target of islamophobia than men. This has been linked to a number of reasons. It can be caused by religious characteristics such as clothing that will identify a victim as Muslim and make them visible to perpetrators, as well as stereotypes driven by the media that showcase women from the Muslim community as being submissive, passive and being victims of gender-based violence within their own communities. This in turn makes them a target for individuals who already have violent tendencies.

We work closely with local partners such as Stand Against Racism and Inequality (SARI), as well as community leaders, local authorities and other organisations, to combine resources, gain a better understanding of the underlying societal problems driving hate crime, and provide alternative support services to victims.

Bristol-based charity SARI has been supporting victims of hate crimes for almost 30 years and is one of our longest standing partners in tackling hate crime. Most of SARI’s staff have had direct experience of hate-motivated crime, and offer practical and emotional support to people who face discrimination based on their race, faith, disability, sexuality, or gender.

In 2015, SARI set up the Tackling Islamophobia Working Group (TIWG) to bring Muslim community representatives, local authorities, the police, and other agencies together in the Avon and Somerset area. Since its inception, TWIG has spearheaded strategies to prevent and tackle anti-Muslim hatred following a huge rise in abuse due to terror attacks, to dispel negative tropes and myths about Islam, to celebrate Muslim culture, and to bring different Muslim communities together to increase their security and positive interventions.

One of the aims of the group is also to educate people about the hijab after police figures showed that religious hate crimes against women in the region are largely anti-Muslim with women targeted because of the head cover.

“It is really important to dispel misguided views about why Muslim women choose to wear headscarf as it is this sort of ignorance that leads to people being abusive to Muslim women. For example, many wrongly believe that Muslim women are forced to wear headscarf by Muslim men. In actual fact almost all Muslim women wear a headscarf completely out of choice and with great pride enjoying the variety of fashions in headscarves. They also enjoy their privacy when it comes to how they expose themselves publicly. Muslim women have a very strong and positive sense of identity.”

What age do you have to wear the hijab?
Hasina: Both Mariya and I chose to wear hijabs when we were adults for personal reasons. For me it felt right as I became closer to my faith. It is a part of my identity too.
Mariya: The age of wearing a hijab varies depending on choice. I personally chose to wear the hijab at the age of 12 when I started high school – it felt right as a transition into a new stage of life and soon after I was exploring my faith more. It very much depends on experiences and choice.

Do you wear the hijab all the time?
Hasina: Certainly not. For example, I do not wear the hijab in the gym or at home, or sometimes if popping out to collect one of children, but this varies from person to person.
Mariya: This again depends on preference and choice. I wear my hijab most of the time other than at home.

Why do you wear the hijab?
Hasina: I don’t believe anyone has to wear the hijab it’s a personal choice, we each have our own personal journeys. Some girls are brought up to wear hijab from a young age, but many do not wear the hijab at all.
Mariya  I wear the hijab because it brings me closer to my religion and allows me to remember the core principles of my faith, which revolve around striving to be a good person every day. It’s a lifestyle choice and it has become a part of my identity.

What are the different types called?
Hasina: Hijab is a form of modesty and there are many different variations.
The ‘niqab’ is a face covering.
The ‘hijab’is the most common covering and can be worn with any modest clothing i.e. English or other
Mariya: below is a picture of some of the different types of hijab. 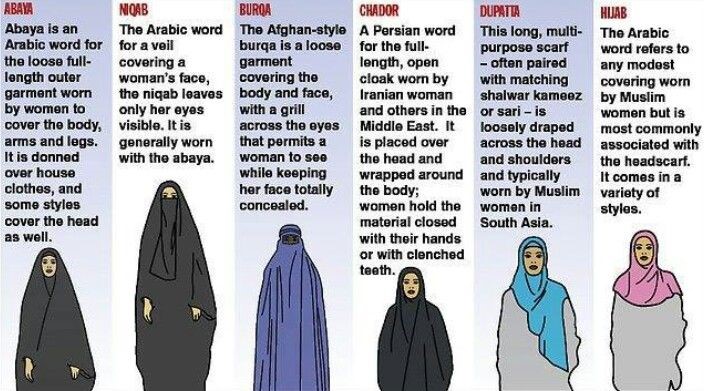 Do you swim in hijab?
Hasina: A few years ago I would have said this is a ludicrous question (due to my ignorance on this), however I have learned that you can purchase hijab swimwear and there is a growing market for modest swimwear in general.
Is there a colour pattern or code, do the different colours have different meanings?
Hasina: Unfortunately not (although I’m tempted to make one up!), it just depends on your mood and what you are wearing. Think of it as akin to women matching shoes to their outfits.  I have a ridiculous amount of scarves (hijabs) but I’m a little bit stuck in my teenage grunge era and tend to wear the darker colours more often than not!

Reporting hate crime
You can report hate crime by calling 101or via our website HERE. Always dial 999 in an emergency.
If you don’t feel like you want to speak to the police, you can also report hate crimes to SARI. See here for more information: www.sariweb.org.uk