Avon and Somerset Police’s Wildlife Officer is using ‘World Wetlands Day’ to highlight the vital role that these areas play and how important it is to protect them.

Each year on 2nd February World Wetlands Day marks the date that the Convention on Wetlands was signed in the Iranian city of Ramsar in 1971 by countries around the world. The international treaty protects wetland areas along with the habitats of a large variety of plant, bird and animal species. As of last year, the treaty covers 252,479,417 across 2,341 sites.

One of the areas protected by the treaty is the Somerset Levels and Moors, which cover around 170,000 acres. They stretch from Clevedon in the north, to Ilchester in the south, then to Bridgwater Bay and the tidal Bristol Channel beyond form its western boundary. Within the area, there are 32 Sites of Special Scientific Interest (SSSI), with 12 of them classed as Special Protection Areas. This includes the River Huntspill, Bridgwater Bay and Shapwick Heath.

Avon and Somerset Police’s Wildlife Officer, PC Pete Wills, said: “World Wetlands Day is a great opportunity to remind our communities of the wonderful wildlife that surrounds us. Many people will know that these areas exist but may not realise how internationally significant they area. They are protected for a reason, so it’s vital we do everything we can to preserve them and help them thrive. 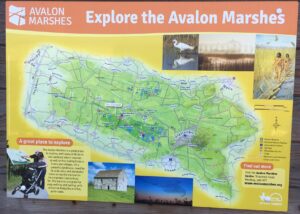 At the heart of the Somerset Levels and Moors is Avalon Marshes which covers 12,500 hectares of the River Brue floodplain between Glastonbury in the east and the M5 motorway in the west. It’s internationally important for wildlife, especially the large flocks of migrating birds that fly in each spring and autumn to join the ducks, waders and other animals that are here all year. Visitors come from far and wide to see marsh harrier, bittern and great white egret.

PC Wills continued: “Our wetland areas are home to a rich biodiversity of plant, bird, animal and insect species, some of which do not exist in other parts of the country, so there are laws in place to protect them. Wildlife can’t be easily replaced as they are part of an ecological circle, so it’s our duty to look after the area we live for future generations. The staff and volunteers that look after the wetland areas have a wealth of knowledge and they put on regular events to help educate people on the work they do.” 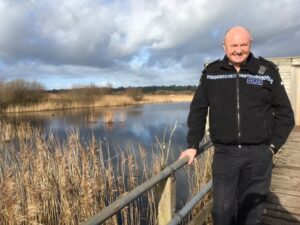 Rachael Fickweiler, Head of Nature Reserves and Land Management at Somerset Wildlife Trust, says: “World Wetlands Day is a great opportunity to celebrate our wetlands and recognise this important and unique habitat. The Avalon Marshes in Somerset, home to our popular Westhay Moor and Catcott Lows reserves, is not only one of the finest remaining lowland wetlands left in Britain but is also a critical home for vulnerable wetland bird populations such as the Bittern. It is also an internationally important overwintering site for tens of thousands of ducks and waders.

“Teeming with invertebrates, rich in plants (such as the weird and wonderful round-leaved sundew which eats insects!) and a haven for mammals, wetlands like the Avalon Marshes offer an unforgettable experience for our visitors, but also provide a valuable service. Some wetlands are also peat-forming, which is a vital carbon store. The UK’s peatlands store over 3 billion tonnes of carbon, around the same as all the forests in the UK, France and Germany combined. Wetland vegetation also helps to slow the flow of water, helping to prevent flooding, and wetlands can also help filter water, improving the water quality. It is essential we look after our wetlands and peatlands, and to ensure these areas are kept wet and in good health for wildlife that lives there, but also for the health of our planet.”