You are here: Home » News » Force tribute to PD Jet following his death in service

It is with great sadness that we are announcing the death of one of our police dogs, PD Jet, who was injured following an incident whilst on duty yesterday morning (14 April).

Jet, a six-year-old German Shepherd, had been deployed to locate suspected offenders following a report of a burglary at a commercial premises in Yate when he free tracked onto an obscured section of railway line and was struck by a train.

Sadly, despite receiving emergency treatment over the past 24 hours, his injuries were deemed too severe and the decision was taken to put him to sleep at midday today (Thursday 15 April).

The burglary suspects remain outstanding and enquiries to locate them are ongoing.

Since joining us from Devon and Cornwall Constabulary in September last year, Jet has had some outstanding successes within Avon and Somerset, including locating wanted and vulnerable persons. 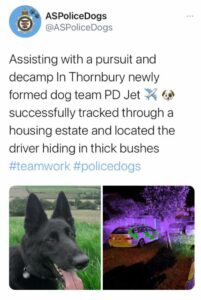 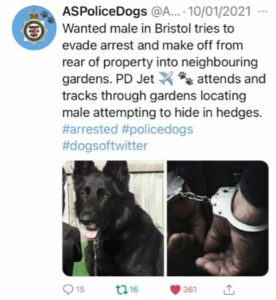 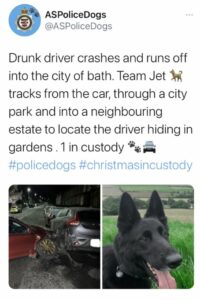 “Jet was a determined and focussed Police Dog who loved working in the many important roles our dogs perform in, all of which help to keep our communities safe.

“Jet and his handler had a very special bond which was cemented by the months of hard work and training carried out. Jet will be missed by all within Avon and Somerset Police”.