You are here: Home » News » Four people guilty of the murder of Andre Gayle in Bristol
Andre Gayle

Three people have been convicted of murdering 29-year-old Andre Gayle who died after being stabbed in Bristol last summer.

A fourth person had previously admitted a charge of murder.

Andre, a father of six young children, was stabbed nine times during the attack, which happened in an alleyway close to Easton Community Centre, at just after 3am on Monday 31 August, 2020. He died at the Bristol Royal Infirmary two days later.

The three people found guilty of murder following a trial at Bristol Crown Court are 28-year-old Rico Corbin, of Speedwell; 28-year-old Tyan Finlayson, also of Speedwell, and a 17-year-old boy who cannot be named for legal reasons.

They, along with Jerome Lewis, 25, from London, who pleaded guilty to murder at an earlier hearing, will all be sentenced on 5 July. 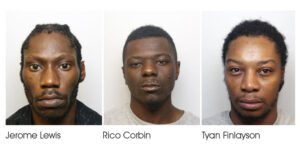 Detective Inspector Roger Doxsey, of the Major Crime Investigation Team, said: “Andre Gayle died in a senseless knife attack, which was carried out in front of a large crowd who’d gathered for a silent disco in the early hours of the late August Bank Holiday Monday.

“While the motive for this pre-planned attack on Andre has never been fully understood, the CCTV evidence is clear and unmistakeable. It has shown the investigation team and indeed the jury this was a savage, vicious and unrestrained attack on an unarmed man by a group of cowardly individuals who acted together, and who were prepared to use knives to achieve their objective.

“They showed a total disregard to other members of the public who were in the immediate vicinity, which included another innocent man who was repeatedly stabbed in a case of mistaken identity, but who thankfully survived his injuries.

“Owing to a comprehensive review of the evidence gathered during the course of our investigation, we determined that Jerome Lewis and Rico Corbin carried out the fatal attack on Andre, assisted and encouraged in this horrific act by those who have been jointly convicted of murder following the trial at Bristol Crown Court.

“A specialist family liaison officer has been supporting Andre’s devastated family and loved ones throughout and we’d like to pay tribute to the courage and dignity they’ve shown despite having to deal with this tragedy. We’d also like to thank all the witnesses who came forward, especially those who gave evidence during the trial.”

A statement from Andre’s mother reads: “My family is grief-stricken and struggling to come to terms with not only losing my son but also the brutality and senseless evil in the way they attacked and killed him; it was tantamount to a public execution.

“These men are fearless, remorseless and have shown total disregard for people in the community of Bristol and caused innocent bystanders to flee in terror at what was unfolding in front of them. During this trial we have had to watch CCTV footage of Andre’s last moments alive which has been harrowing, the pain is immeasurable.

“It is still hard to accept that he is gone and I personally don’t think I will ever be able to accept the loss. Too many parents are losing and have lost their sons and family members to this epidemic of knife crime and I want my grandchildren, Andre’s children, to be safe and have a future without these murderers walking amongst us.

“We have now come together as a family to love, guide and support Andre’s children whose young lives have dramatically changes. We need time as a family to grieve properly and try to heal. I would like to thank everyone who has given and shown so much support, I couldn’t have got through this without them.”

A statement from Andre’s father reads: “Seeing my son lying in the hospital bed, completely motionless, being kept alive by machines – my boy, who had so much energy and spirit – his life taken from us. No parent should have to bury their son.

“My son, who is also a father, will never see his children grown up – not only have I lost a son, his children have also lost a father. Andre’s siblings, who too are devastated by his death, will never be able to have a relationship with him. So many lives destroyed by the hands of these vicious murderers.

“Taking these murderers off the street will not bring back my son, but it will prevent the suffering of another family and allow our kids to grow old and die naturally.”

Detective Inspector Doxsey added: “Knife crime is a current curse on our communities and we have shown together that we will not stand for it, and we’ll painstakingly track down and bring offenders to justice. We were overwhelmed by the volume of supportive information from the community in this case and we’re so grateful for that. We need this support to continue to prevent future crimes.

“Early intervention and multi-agency partnership work is key to tackling knife crime and serious violence – especially the work of the Violence Reduction Units (VRUs), which takes a holistic approach in supporting young people to stay safe and away from crime.

“But we also must continue to take a robust approach to enforcement and use all the tools available to make our streets safer. We’re always listening to our communities, and will work with them to respond to concerns about violence and anti-social behaviour. We need our communities to tell us what they know – every report helps us to build a clearer picture of what is happening and where, so that we can target our responses effectively.”