You are here: Home » News » Rural affairs unit acquires dedicated drone for use in crime prevention and detection

Avon and Somerset Police Rural Affairs Unit has invested in dedicated drone to assist officers in preventing and detecting rural crime, including wildlife crime such as hare coursing.

The unit has recently undergone training to operate the drone, which will utilise thermal imaging to track offenders in isolated areas after dark.

Hare coursing, which involves setting dogs to chase hares, often takes place on land that has been entered illegally and can cause considerable harm to property, crops and livestock.

The practice was banned in the UK by the Hunting Act 2004 but illegal activity remains prevalent, particularly following the August harvest and during the autumn months.

“We know that many instances of hare coursing and other rural crimes go unreported as landowners believe they won’t be taken seriously. But we’re aware of the devastating effects of these offences, and the fact they are often linked to wider organised crime.

“That’s why we are urging victims to come forward.

“Our investment in new technology is giving us far greater capability to catch offenders, but we can only do this when suspicious activity is reported to us.

“We’re hopeful that the drone will further strengthen our links with our rural communities, enhance our capability to prevent crime and build a clearer picture of organised crime groups’ activities.”

The new drone will also play a key role in crime prevention, allowing the unit to offer surveys to repeat victims of rural crime to identify potential areas of weakness on their land which may make them a target for criminals.

“I am delighted with the Rural Affairs Unit’s latest investment and hope this dedicated drone will provide the team with greater capability to efficiently and effectively catch those offenders who impact our rural communities.

“During my campaign to become PCC and since being elected, I have spoken to many local people in rural communities about their concerns including trespass, theft, poaching and hare-coursing. I am hopeful that this technology will reassure residents that the police do take these crimes seriously and is another step in telling offenders that they will be brought to justice if they come and commit their crime in Avon and Somerset.” 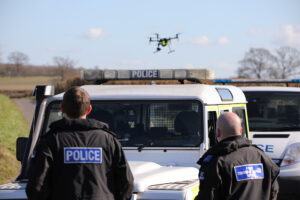 “Making use of drone technology will give the Rural Affairs Unit an increased ability to spot crime, gather evidence, make arrests and keep people safe.

I would urge all farmers and those in rural communities to make sure crimes are reported as this gives the rural affairs unit the evidence they need to get the right level of resource in the areas that need it the most.”

Proposed changes in the law by Defra, including the introduction of the offence of ‘going equipped’ for hare coursing, will give police additional powers to target offenders.

“This type of rural crime, which often involves high-stakes illegal betting, causes thousands of pounds worth of damage to land and crops and sees many rural communities intimidated. Many of our members live in fear of being targeted as we know how vicious the people that take part in this type of rural crime can be and it is encouraging that Avon and Somerset Rural Affairs Unit now has state of the art technology to help detect this crime in action.

“Together with the recent announcement stating Government has pledged to crack down on illegal hare coursing with the introduction of new legislation, meaning police and the courts will have greater power to tackle offenders in the field, remove the tools of their trade and impose stiffer penalties at conviction is incredibly encouraging. We have been lobbying for many years for greater punishment for the perpetrators of hare coursing.”

Further advice on protecting rural property can be found on our website. 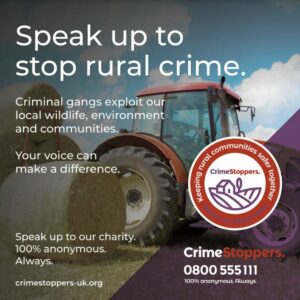 Over the next four weeks, we’ll be supporting Crimestoppers’ #RuralCrime campaign.

We all have a part to play in keeping the countryside safe from crime. The new #RuralCrime campaign from @CrimestoppersUK is here to highlight the many ways crime impacts rural communities, and how you can help by speaking up with info, 100% anonymously.

To report crime or suspicious activity, call 101. In an emergency, or if a crime is in progress – it’s always 999.