You are here: Home » News » Police horses and riders who faced rioters honoured with national award

Avon and Somerset Police’s mounted patrol section, who played an instrumental role in policing the protests and the riot which broke out in Bristol city centre earlier this year, have been honoured with the first ever Police Horse and Officer Action of the Year award.

The presentation took place in front of thousands of spectators and competitors from all over the world on the final evening of the 2021 Horse of the Year Show at Birmingham’s NEC.

On Sunday 21 March what began as a peaceful protest against the proposed Police, Crime, Sentencing and Courts Bill culminated in a minority of people engaging in a riot outside of Bristol’s Bridewell Police Station.  The mounted team, alongside their police colleagues, faced a hostile situation in which missiles were thrown at officers, police vans attacked, demobilised and set on fire and the police station targeted. 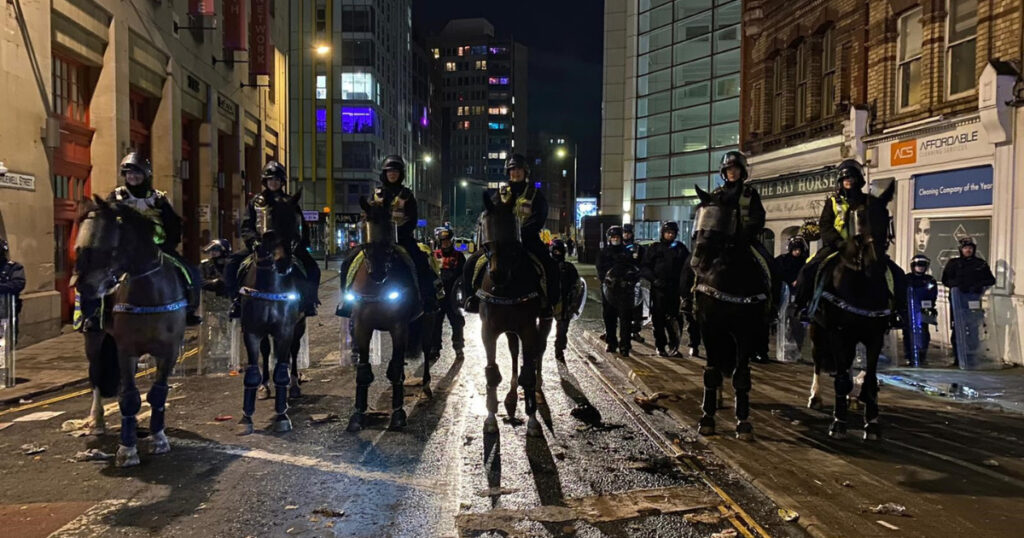 The intensive training of police horses Mendip, Somerset, Windsor, Trinity, Blaise and Clevedon enabled them to negotiate the escalating situation with confidence and the mounted team courageously carried out their duties to restore order and protect the public and their colleagues.

After the event, Police Sergeant Hannah Clarke said that it was the highest level of aggression she had ever experienced in her career. “You could hear on the radio officers pressing their emergency buttons asking for more units”. The horses she described as “just amazing”, taking reassurance from each other.  Support from members of the public that followed in the form of messages, cards and gifts, Hannah added, was greatly appreciated.

Several of the team worked 17 hour shifts, 12 of which were spent in the saddle. Despite this they tirelessly carried out reassurance patrols for their local communities the following day and remained on duty all week.  When a second night of hostility followed a peaceful demonstration on Friday March 26th, the team again rose to the challenge.

Also in attendance were PCs Helen DuHeaume and Amy Huxtable, who had been part of the mounted patrol team on March 26, alongside, other mounted officers and grooms including Stable Manager Jon Green, Kelly Wanstall, Natalie Box, Sara Treble and Darryl Snow, whose passionate commitment to maintaining a high standard of care ensured the horses were ready and fit for duty.

Chief Superintendent Claire Armes, Head of the Operational Support Directorate at Avon and Somerset Police said: “What our officers and horses experienced were levels of violence like nothing they had seen before.  The courage and resilience they displayed was a credit to their characters, their training and to the outstanding bonds of loyalty and trust that our officers have built with their horses.

“Seeing our mounted section team recognised for their professionalism, bravery, dedication and commitment with such a prestigious award makes us immensely proud and we thank them, and all of their colleagues who experienced the terrible events in March, for their outstanding work in protecting the public and their colleagues.

“Our police horses have played a major role in every single public order incident in Avon and Somerset in the last 30 years, helping us contain and manage major incidents, protect the public and prevent injuries.  They are, beyond doubt, a hugely valuable asset to our service.”