A woman who crashed a van into a house killing its 90-year-old resident has been convicted of causing death by dangerous driving following a trial.

Tracy Bibby, 35, was banned from driving at the time she steered a Ford Transit into Joan Woodier’s house on Yeolands Drive, Clevedon at around 8.30pm on 18 April last year.

The van was left embedded in the front wall of the house which collapsed onto Mrs Woodier as she spoke to her son on the phone. 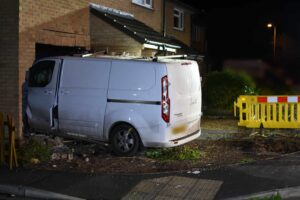 Bibby, of Rushmore, Clevedon, denied causing death by dangerous driving but was convicted following a trial at Bristol Crown Court. She was also convicted of causing death by driving while disqualified. She’ll be sentenced at the same court on Friday.

The jury heard Bibby had been at The Crab Apple pub moments before the incident.

The pub’s CCTV captured her getting into the van on the driver’s side, while a witness told the court she spoke to Bibby through the window as she sat behind the wheel before she pulled away.

In her defence, Bibby claimed she had switched places with one of the other three passengers in the vehicle after driving away from the pub and that she wasn’t responsible for the crash.

Several of Mrs Woodier’s neighbours came out of their homes after hearing the collision to see if they could help.

One neighbour told the jury how she overheard Bibby telling one of the van’s passengers “it wasn’t my fault, he made me drive”, referring to another of those who had been inside the vehicle at the time.

A police forensic collision investigator later examined the scene and concluded the van had driven into the house at a speed between 32mph and 40mph. The road’s speed limit is 30mph.

Collision Investigation Officer, Tony Hall, said: “Bibby has consistently refused to take responsibility for her reckless actions that night which tragically resulted in the death of Mrs Woodier.

“She sought to blame someone else even though all the evidence pointed to her being the one behind the wheel.

“This is a terribly sad case but I hope today’s result goes some way to providing closure for Mrs Woodier’s family.

“I’d like to thank them for the patience and support they’ve demonstrated during the past year which I know at times has not been easy.”

In a statement, Mrs Woodier’s family said: “The family would like to thank the police, the Crown’s prosecutor and our two amazing liaison officers for getting us through this horrendous time.

“To all of mum’s neighbours who showed tremendous courage and resolve in trying to rescue her out of the remains of the house on that fateful night.

“Also to their strength of character and voice when having to stand up in court and relive that awful scene.

“We cried for you when you were cross examined but you never wavered from your belief of events.

“This could all have been avoided so easily but unfortunately it wasn’t to be.