A woman who pushed a bin into a burning police car during the riot in Bristol last March has been jailed for nine months.

Jasmine York was found guilty of arson by a jury at Bristol Crown Court following a trial last month.

The 26-year-old was captured on camera pushing a large wheelie bin into a police car which was engulfed in flames. 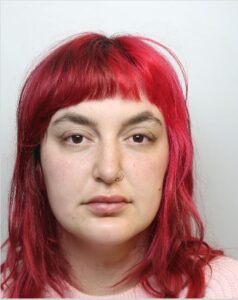 York, of Brislington, Bristol, is the fifteenth person to be sentenced for crimes committed during the riot outside Bridewell Police Station on 21 March last year.

To date, they have been jailed for a combined total of 57 years and 11 months.

Sentencing York, His Honour Judge James Patrick rejected her claim she acted out of fear and highlighted that she herself admitted her behaviour “did not de-escalate events”.

He said the fact she had returned to the scene of the disorder having previously left was an aggravating factor.

Addressing York directly, the judge said: “You were very aware of the damage caused to police equipment and property paid for out of national taxation for the benefit of the community.

“You played your part in the unlawfulness.”

“She may not have physically attacked officers but she added fuel to the fire of a burning police car, creating an intimidating atmosphere for officers trying to maintain order.”

We’d like to remind all concerned that criminal proceedings relating to the events of Sunday 21 March are ongoing against other defendants and that they have a right to a fair trial.

It is extremely important there should be no reporting, commentary or sharing of information online which could in any way prejudice these proceedings.